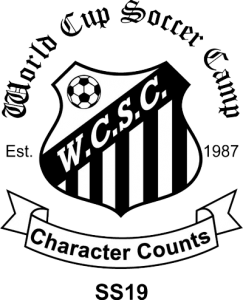 World Cup Soccer Camp was founded at the request of many parents who were disillusioned and disappointed with the lack of instruction and subsequent lack of improvement offered at previous camps their children had attended. Although many of these soccer camps had good intentions, and some were even fun, they offered very little in developing skills, tactics and character. With that in mind, WCSC was established with three core principles:

If our campers can evolve into great soccer players that is tremendous, but we would rather have them evolve into great human beings first. Therefore, at WCSC, character is priority number one. We attempt to challenge and improve each campers character every day. This begins with our commitment to excellence within a consequence-based training environment.

The key to success in any sport is mastery of the fundamentals. This is what we are all about at WCSCwe try to build a solid soccer foundation in each and every player, based on fundamental skills and tactics.

At WCSC, we feel training should involve hard work and sacrifice, however, this doesn't mean it shouldn't be fun. That is why we have created a stimulating, fun-filled program, not only to ensure improvement but also to inspire kids to want to play soccer.

At World Cup Soccer Camp you will improve your game and have a blast doing it.

MESSAGE FROM THE DIRECTOR:

As a local business owner, coach and parent of two, I embrace the tremendous opportunity and responsibility I have as the director of World Cup Soccer Camp to positively impact our campers. Our staff's ability to teach with a positive attitude, enhanced by our playing backgrounds and commitment to excellence, means that each camper will leave camp a better soccer player, teammate and individual. As one of the original campers at WCSC in 1988, I am blessed to keep the strong tradition alive that coach Dean worked so hard to create.

It's a beautiful New England day during February vacation!
Make sure you get outside and play!

What a great opportunity to practice your ⚽️ magic moves! ... See MoreSee Less

We can’t wait to coach all of you this summer!!!! ... See MoreSee Less

Register as an Early Bird for your chance to win a set of agility hurdles!

Your registration will enter you into a drawing (one girl, one boy) for your own set of Smart Hurdles so you can work on your speed and agility for soccer!

Beyond teaching skills and drills.